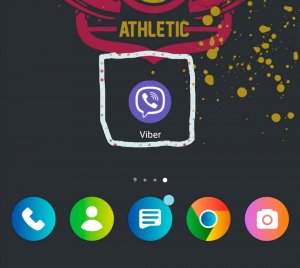 Viber - Q&A
Submitted By: App User
Seller: Viber Media SARL. (...) Category: Social Reviewed Version: 12.1
Download: iOS Android
Other Similar Apps:
Price: Paid Options
With Viber Out,  you can make international calls to anyone (landline or mobile), even if they don't have Viber, at low rates. You can buy fixed price monthly subscription plans, or call credits.

An instant messaging app, Viber, is used all over the world. It is a multi-platform application that was initially made for Apple iOS but later released for Android (and other iOS) and then a desktop version. It is free software, operating soul-ly on the internet connection, other than making calls to Non-Viber contacts by Viber Out.
Viber lets you broadcast messages to multiple contacts, send messages, images, videos, audios emoticons, gifs, and stickers instantly to anyone. Viber is the only instant messaging platform that lets Brands and Labels talk to their customers with features like Viber Community. Viber is the answer to all your Instant messaging problems.

• Stay In Touch: Use Viber for sending an instant text, audio, picture or video messages, even contacts, free to everyone with a Viber account. You can even send short instant video messages like voice mails.
• Stickers and Gifs: Enhance your chatting experience by sending stickers and Gifs in between texts. Relay your emotions or moods with unlimited Gifs and over 35,000 available stickers. Make your conversations fun by conveying complete messages with emoticons.
• Delete Messages: Delete any messages you did not mean to send.
• Secret Chats: Start a secret chat where your messages will destroy themselves after a pre-defined time from the receiver’s phone.
• High-quality Calls: Make high-quality voice and video calls to your Viber friends. Alternatively, use Viber Out to call landlines or numbers without Viber.
• Viber Out: Pay a small amount monthly to use Viber Out and make international and local calls to numbers with Viber or internet availability.
• Multi-platform: Viber synchronizes your complete data on all the platforms you open your account. Unlike other instant messaging apps, you use one account on more than one platform.
• Prioritize your Privacy: With End-to-End encryption be sure that your messages will remain only between the sender and receiver. At Viber, Privacy and security are taken as the first priority. The messages sent travel to the receiver’s device in the form of encrypted data that can only be unlocked with an encryption key in the receiver’s phone. This ensures no one other than the receiver (not even Viber) can read your messages.
• Group Messages: Have more than one friend? Want to chat together? Use Viber Group messages to text them all together and interacts with each other with all features of that in a simple one to one conversation on Viber.
• Viber Community: Make a community of any topic or reason, with unlimited members. Interact and chat with members from all over the world. The Admin gets to control everything.

1. Viber is very easy to use. The interface is very relaxed and designed to make things easier for everyone.
2. It makes it possible for all the users to interact with anyone all contact others with or without a Viber account. For a low amount, you can call almost anyone. Using this feature, a simple tablet or laptop can be converted to a full phone.
3. The calls and chats are secured with high-end security. The unencrypted key is only with the receiver so even the app mangers of Viber can read messages between you and your loved ones.
4. Short video messages are a newer feature that most instant messaging apps do not have.

1. Viber status stays continuously Online. Unlike most instant messaging apps, Viber’s status is constant. Either Online or Offline. It doesn’t change according to usage.
2. Only seen messages can be deleted. If a wrong message has been sent, there is no way to delete the text, picture, audio or other unless the receiver has seen the message.
3. Viber is at times unable to read contacts on phones or the platform in use.

Other Information to Know
Viber is the product of a collaboration of four friends who wanted the ability to contact people from all over the world without getting back a huge bill. The actual app was released in December 2010, only for Apple iOS. Then the android version was released in July 2012, followed by a desktop version in May 2013. Viber has currently around 1 Billion downloads from all over.

Dislikes:
• Viber is not locally used, so it can be a nuisance if you are trying to reach someone and they have deleted Viber from their phones.
Rated App Version: 12.1 Phone Used: HUAWEI - reviews Country: United States